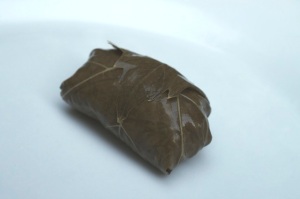 In less than a month, I’ll be back in Greece buying white peaches from my Yiayia’s (grandmother) neighbourhood laiki (produce market) and learning how to make feta cheese from the thea’s (Aunties) in the horio (village).  But lately I’ve been channeling my ancestors by consuming far too many olives and craving those cultural food comforts like lamb and dolmades.  The craving manifested itself when we decided to have ten friends over to watch some doccies on a projector.  I looked in our fridge and we didn’t have much but some leftover pickled ginger, bamboo shoots, cabbage, carrots, and a jar of vine leaves..

There aren’t many weekends left before we go to Greece, so attempting the dolmades became decided.

When I was fourteen, My Uncle Terry came to visit us from Israel and brought my mom the ultimate gadget: The Dolma Roller.  You place your vine leaf flat and your stuffing in the middle of the gadget, pull a lever towards you and out pops a tightly rolled dolma.  It seemed to work when we tested it out with newspaper and you could even change the size of how thin or thick you wanted the dolma to be rolled.  We were impressed but it was never put to real use, it never made it to the kitchen and was tested to roll other things in the basement.  Dolmades I most enjoyed were at my Yiayia Chrissy and Thea Toula’s house in Detroit, Michigan where they used a lamb/rice stuffing and made an avgolemeno sauce served on top of them.

Luckily in Cape Town, you can buy vine leaves and my friend, Frances, brought them over one day thinking they were ready made dolmades. I had made that mistake once before. She left the jar with me and they sat therefor three weeks waiting to be made until there was nothing left to make but these delicious hand-rolled dolmades.  With some research on rolling styles, I managed to make 50 dolmades and created an easy vegan stuffing recipe that can be creatively adapted to use lots of different legumes that you can experiment with.  With the left over stuffing I made vegan patties to cook on the grill.  Scrumptious!  That recipe later….

Salt and Pepper to taste

Lemon slices for the bottom of the pot

Makes enough stuffing for about 50 dolmades

Boil water and put in the rice, lentils, salt and pepper, chopped onion, carrot, cabbage.  Lower to a simmer until fully cooked or put it in your hot box for two-three hours.  I never knew how to cook rice perfectly until I made this hot box.  I think it is a must-have and you save a load on electricity.  While the stuffing is cooking, grate the 2 onions into a pulp.  Add this to your cooked rice and lentils and knead it into the stuffing so it creates a wet dough-like consistency you can form into mounds.  Wash the vine leaves off from the preservative water they are stored in and lay it out flat. 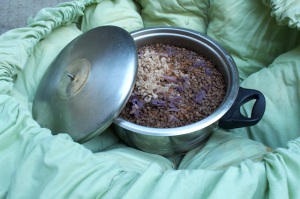 Place about 2 tablespoons of your stuffing mix by the edge of where the stem would start from the leaf.

So all your hard work of rolling each dolma by hand isn’t put to waste, the agitation caused by boiling water won’t disturb the dolmades that are securely weighed down by your plate, bowl, rock combo. Place the lid on top of the pan and boil the water on medium heat for an hour, or place in the handy little hot box and open up two hours later…

If there is left over water, drain it and place your steamy dolmades onto a platter.  Pour the fresh lemon juice over the them while they are still hot and then drizzle lots of olive oil to make them shine.  I wanted to take a picture of the final platter, but in 10 minutes, between 12 of us, all the dolmades were eaten and enjoyed. I was hoping there was going to be leftovers, so next time I’ll have all my sisters over to have a troop of us rolling the dolmades for us to eat and take home.  I definitely will be making these babies again, seeing they were so simple to make and with the help of the hot box, it made it super economical to make. Can’t wait to be eating mezedes in Ellada!  If I were to open a sidewalk cafe, it would definitely be made up of mezze platters featuring these super simple lemony scrumptious vegan dolmades.